The war in the Ukraine and our forests

The war in Ukraine has deeply shocked us all. Besides the unspeakable suffering of the people, the war also has an impact on all areas of social and economic life, among them forests and the trade in timber.

Wars have always affected forests. Be it because they were used by the ammunition industry or because they were destroyed by opposing parties at war. Sometimes they were the last remaining source of food and raw materials for the war-torn population. Fugitives have also often used forests as places of refuge.

Putin imposed an export ban on logs in early January

Russia is, or was, the world's largest exporter of timber. According to research by Wood Resources International, Russia exported around 15 million cubic metres of logs in 2020. This corresponds to about 12 per cent of the logs traded worldwide. At the beginning of 2022, this market collapsed, as President Putin imposed an export ban as early as 1 January to support the Russian wood manufacturing industry. Since the beginning of the war, the rest of the import and export of timber and timber products between the European Union and Russia has also largely come to a standstill.

On 2 March, Stora Enzo, the world's second largest forestry company, announced that it would stop production and sales in Russia and also all exports and imports to and from Russia until further notice. One day later, on the 3rd of March, the furniture company IKEA and the largest cooperative forestry and paper company in Europe, the Metsä Group, joined in with similar announcements.

On the 9th of March, Europe's largest paper company, UPM, followed suit. Having decided to stop exports to Russia on 3 March, UPM decided to stop buying Russian wood a week later. Currently, these four companies are the only ones to react in this swift and exemplary manner. Not even an appeal by 120 environmental and human rights organisations to ban the import of all types of Russian and Belarusian wood and wood products, including all paper products, furniture and furniture parts, pellets and sawn timber, changed this. At least the three major timber certification schemes, FSC, PEFC and SPB, decided on 8 and 9 March to exclude timber and timber products from Russia and Belarus from their certified products.

On the 11th of March, the organisation Earthsight published research stating "Russian oligarchs with close, long-standing ties to Vladimir Putin are behind the country's largest logging companies and exporters of wood products." The "companies (...) are among the largest exporters of Russian timber to Europe, the US and Japan. Their lumber, plywood and paper is sold by major retail chains such as Leroy Merlin, used in high-profile construction projects such as for the London Olympics and the Trump Tower Toronto, and in the packaging of Mars and Kitkat candy. Together, these oligarch-linked companies control Russian forests which, combined, are about the size of France. Forests that are home to valuable wildlife such as Siberian tigers, lynx and brown bears. Many of the suppliers and buyers featured here have already been exposed for illegal or destructive logging of high value forests in Russia, or for buying illegal Russian timber." This research made it clear that voluntary trade waivers by individual companies are not enough to prevent the timber industry from paying into Putin's war chest.

On 11 March, the Russian Ministry of Industry and Trade proposed that it will ban the export of timber and wood-related products such as raw materials for paper and plywood production to "unfriendly countries" by the end of the year. The European Commission and national authorities from 27 European countries, most of them EU member states, were slow to make a decision on this and then wrestled their way through on 16 March to at least criminalise the import of timber and timber products from Belarus. Only on 8 April did they decide on similar regulations for timber and timber products from Russia. These disruptions in the timber trade caused the price of timber in Austria and Germany to rise by around 20 percent as early as the beginning of March.

A good example for how our forests could be transformed during war is Estonia. Estonia is the fourth most forested country in Europe and had recently decided to reduce logging in its own country by 13 per cent. However, with the war, timber imports from Russia, which in the past had covered 30% of Estonia's timber needs, are now no longer available. The timber industry was quick to call for relaxations in logging yet according to Estonian forest conservationists, the current logging is already too extensive for the forest to recover from.

Ukrainian forests for the russian army?

On the 16th of March, a disturbing document concerning forests was published by the Ukrainian intelligence: according to it, Russia is planning a massive deforestation of Ukrainian forests to make room for fortifications, defence installations and other military purposes and to make the proceeds from the timber available to the Russian Ministry of Defence. "The last time this happened on Ukrainian territory was during the Nazi occupation," the Directorate of Ukrainian Intelligence said, "when the invaders destroyed and exported material and natural assets." An ecocide is being planned. The document could not be clearly verified for authenticity, but it shows how the forest ecosystem can become politicized in war.

The forest as a refuge?

Many refugees who sought refuge in the Polish forests behind the Ukrainian border in recent months did not feel safe there at all. All (Ich würde sagen Most of) the people who were and are fleeing from Afghanistan, Syria and other non-European countries have experienced this. They freeze and suffer in the forests of Poland after crossing the Belarusian-Polish border. Left with no other options, they stay there and it is illegal to offer them food, medicine or any other help.

As wonderful and right as the endless willingness to help people fleeing from Ukraine is, "Fortress Europe" is merciless and inhumane towards people seeking refuge from other war and crisis zones via the Belarus-Poland route. The few activists who help despite the threat of punishment are the true heroes of Poland's efforts to help refugees. Poland's border forests are silent witnesses to this ongoing European disregard for humanity.

The forest and energy policies

The Russian army's invasion of Ukraine sent a shudder through European energy policy. Suddenly, the dependence on Russian gas became a problem. Calls for a suspension of the coal phase-out and even for a return to the nuclear age were quickly heard. The first practical steps taken by the German government were not promising at all: liquefied natural gas(LNG) terminals in German ports and Habeck's visit to Qatar further cemented climate- and species-damaging the already existing heat and energy supply strategies, social inequalities and dependence on despotic states that violate human rights. Meanwhile, far less attention was given to the expansion of renewable energy. And as if things weren‘t bad enough, the wood energy lobby has been pushing for the use of wood as a substitute for gas and coal.

The Austrian wood and biomass industry reacted on 2 March with a joint press release. It called for a massive expansion of biomass use, supported by state subsidies worth 2 Billion Euros. And the German Federal Ministry for Economic Affairs and Climate Change announced at the presentation of the amendments to the Renewable Energy Act on 3 March that the use of bioenergy could be strengthened in the short term. The EU, on the other hand, reacted somewhat prudently in its energy plan drafted on 3 March in response to the Russian invasion of Ukraine - no call for coal or nuclear energy. The EU chose to stick to gas, gas and more gas and mentioned the expansion of renewable energy as an additional measure. Biomass or even energy wood were not explicitly mentioned. For the private sector, however, a strong increase in the purchase of firewood and pellets can already be observed. Many homeowners are already filling their wood stores for the next winter, much earlier than usual.

War and the forest – a conclusion

Russia's war in Ukraine is shaking up Europe's timber market. Russia, the world's largest timber exporter, is out of business - at least in Europe. And rightly so. In view of the war raging in Europe, price increases for the valuable raw material wood should be expected. What this market shift will mean for the forests in concrete terms can only be speculated so far. In the best case scenario, wood will be used much more sparingly as a raw material. More likely, the shortage of wood will be quickly compensated by an increase in the felling of other valuable forests, e.g. in the Carpathians or in Scandinavia. In the worst case, we will also lose Russian(meinst du nicht Ukrainian forests?) forests to the arms industry at the same time. Forests have always suffered in wars. And the wanton destruction of ecosystems by the opposing party at war is a well-known, sad practice. But what will affect us and the forests even more fundamentally and far-reaching is the pushing ahead with large-scale industrial burning of forests to counter the loss of Russian gas. With our ROBIN WOOD campaign against the burning of forests for fuel, we have been highlighting the pressure on forests worldwide, which is a result of the European hunger for energy.

The connection between increasing deforestation and clear-cutting and the demand for energy wood has been evident over the last decade. We must not blast the CO2 from our forests into the atmosphere at an even faster rate, destroying valuable habitats and divesting ourselves of the forests' climate mitigation services! If we don't put a stop to this trend now, Putin will have contributed significantly, and for decades to come, to missing our climate targets and to heating up the planet. The first important step in avoiding this would be to no longer classify wood as renewable energy in the EU's Renewable Energy Directive and thus make it no longer eligible for subsidies. The war should not lead to the burning of our forests to provide for an energy and heat supply system that has been botched for decades. Especially now in times of war, we in Europe must send the right signals that the extinction of species and the climate crisis will be strictly countered. Our forests must therefore become untouchable for the combustion boilers of the power plants - for peace! 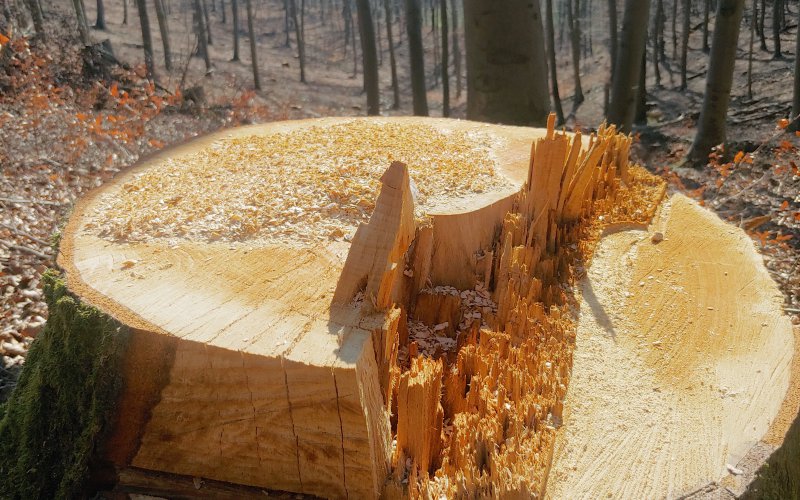